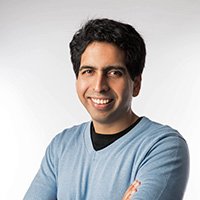 Sal Khan is the founder of the Khan Academy, a nonprofit with the mission of providing free, high-quality education to "anyone, anywhere" in the world. A former hedge fund analyst with degrees from MIT and Harvard, Khan is also the author of The One World School House, which explores the potential impact of the web as a teaching tool. It may be one of the most influential books about education in our time.

Khan's journey began when he was helping a young cousin with math in 2004, communicating by phone and using an interactive notepad. When others expressed interest, he began posting videos of his hand-scribbled tutorials on YouTube. Demand took off, and in 2009 he quit his day job. The Khan Academy website now provides self-pacing software and unlimited access to over 5,100 instructional videos on its YouTube channel covering everything from basic arithmetic to college level science and economics. It's the most-used library of educational videos on the web, with 10 million unique users per month, over 300 million lessons delivered, and over 1.4 billion exercises completed.

Khan's first book, The One World Schoolhouse: Education Reimagined, was published to great acclaim in 2012. Innovators as varied as George Lucas and Nobel Peace Prize Laureate Muhammed Yunus have hailed it as "a must-read." Al Gore had this to say: "Since its founding in 2006, Sal Khan's project—the Khan academy—has revolutionized our thinking on the potential and promise of unfettered, open-access online education. In his new book The One World Schoolhouse, Khan presents his vision and blueprint for how online technology can, and should, play an integral role in educating communities across the globe, closing the opportunity gap and providing high-quality education for all."

A growing number of classrooms around the world are using Khan Academy to help build student mastery of topics and to free up class time for dynamic project based learning.