5 Ways to Use LinkedIn Live from Brands and Influencers

The legendary film director Francis Ford Coppola, who brought us The Godfather among many other cinematic classics, once said his only interest in a TV project would be something involving live television.

“There's no substitute for a team of artists performing at their peak live when failure is possible,” he said. “It's a high-wire act. That excites me.”

As a marketing tactic, live video has plenty of benefits. Clearly, audiences have an appetite for it, and not just because of the exciting real-time stakes referenced by Mr. Coppola. It’s also an extremely engaging way for people to connect with your brand, enabling new levels of interactivity.

Since we rolled out LinkedIn Live last year, we’ve seen thousands of brands and individuals tap into this potential with live-streams on the platform, delighting their viewers and driving clear business results. Today, we’re highlighted five of our favorite examples, to help inspire your next live-streaming moment.

This provider of a flexible and intelligent automation platform already had a strong LinkedIn community in place, with more than 100,000 followers on its LinkedIn Page and an average engagement rate above 6 percent. This foundation, along with a strategic paid ad campaign, set the stage for big success when the company decided to go live with one of its biggest product launches in its history.

Although Automation Anywhere decided to stream the announcement across numerous platforms, LinkedIn Live drove 78% of its total views. But even more than the number of people who showed up, what impressed Julian Foster, Global Head of Paid Social Media, was their readiness to speak up and interact.

“When the live broadcast started, within just a few minutes, we had about 400 positive comments,” Foster recalls. “Then by the end of the hour-long presentation we had one thousand comments … I was with the team in the campaign control room, and they couldn’t believe the quality of the conversations we were having with viewers.” 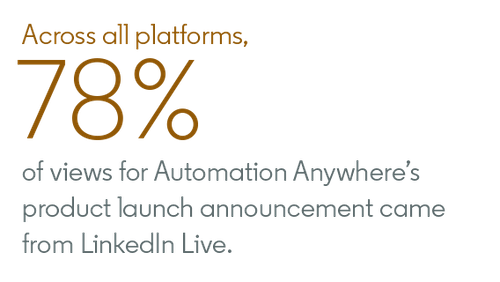 With its biggest annual event coming up last year, Salesforce devised an 11-part episodic series to complement and promote it. As an early test with the LinkedIn Live solution, Salesforce used the tool to broadcast this content (click here for the full story).

While this is a huge brand with plenty of pull based on name recognition alone, the team was still stunned by the level of viewership and engagement they saw on the platform — especially the higher-ups.

“It really came as a surprise to our leadership and executives that we could not only get this sheer amount of organic viewers, but they were thoroughly engaged and their view time was longer than we expected,” said Marissa Kraines, Director of Social and Content Marketing. See below for her 1-minute summary of the experience:

All told, the 11-part series drew more than 600,000 organic viewers, with an outstanding 3% engagement rate. Viewers consistently tuned in for most if not all of the broadcast. “These are numbers you don’t usually see without paid media,” Kraines observed.

Recognizing it as a transparent and cost-efficient way to engage their audience, Detroit Labs decided to give live video a go. The custom software development company launched a show called "Labs Live" featuring expert discussions from their team, but they weren't seeing great results initially. At least, not until they brought the show to LinkedIn Live.

Detroit Labs immediately saw a huge jump in viewership of its video content -- both live-streams and replays -- compared to the competing video platform used previously. “We ran one test on LinkedIn Live before we aired an actual episode, and even that blew our viewership benchmarks out of the water,” said Elyse Turner, Director of Marketing. Not only that, but Detroit Labs could now validate that viewers were professionals they wanted to reach. They shared a case study of their full experience here.

This correlated to a positive impact on business development, with a 61% increase in ad engagement on LinkedIn and 14 encouraging leads generated by Video Ads in just four months. “On LinkedIn, you are attracting a more pointed and engaged audience,” said Detroit Labs co-founder and president Dan Ward. “If anyone stumbles across your live stream, there is always a chance that they are either someone who can do business with you or someone who may apply for a job at your company.”

Katie Martell reaches her fans and followers in the moment

It’s not just brands and organizations that are seeing stellar results on LinkedIn Live. Marketing consultant and brandividual Katie Martell uses the tool to promote her personal brand. She, too, values the heightened element of timeliness offered by live video. Here’s what she had to say:

“If something happens in the morning, I can be live on LinkedIn in an hour to comment on it. And that real-time access is actually a fantastic opportunity,” she said. “For me, that takes away the veneer that exists, and closes the gap between a brand and its buyers in a really authentic and genuine way.”

Founder of the LinkedIn advertising consultancy B2Linked, AJ Wilcox smartly builds his own brand as an extension of his company’s. He dabbles in many media channels to reach his audience, including the LinkedIn Ads Show Podcast, but views LinkedIn Live as an essential part of the mix — partially because of the tailored professional ecosystem that surrounds him, and his company, on the platform. Check out his advice on using LinkedIn Live below:

“I love LinkedIn Live because the network of people that I have curated around myself are all people that I like, and I trust, and I want to do business with,” he said. “Those are the people that are notified when I'm about to go live."

Reach Your Audience Live and Direct

By combining the functional features of LinkedIn Live with the targeting capabilities and contextual environment of the world’s largest professional network, both brands and individuals can reach their audiences in powerful new ways.

With proper preparation, live-streaming doesn’t have to feel like a harrowing high-wire act. But as the companies and people above have shown, delivering content via LinkedIn Live can help your engagement and relationship-building soar.

Ready for your star turn? Learn more about LinkedIn Live and other virtual events solutions.