Talking through these issues was one of the four key steps that helped ThoughtWorks reduce bias in its hiring process, according to Yewande. Today, the technology consulting company has nearly 60% female representation in entry-level engineering roles. Women also make up 30% of its technology leadership roles—almost double the industry average—and ThoughtWorks was recognized as the top company in America for women technologists in 2016.

Yewande shared the four steps that the company took to make this happen in her breakout session at LinkedIn’s Talent Connect 2017. 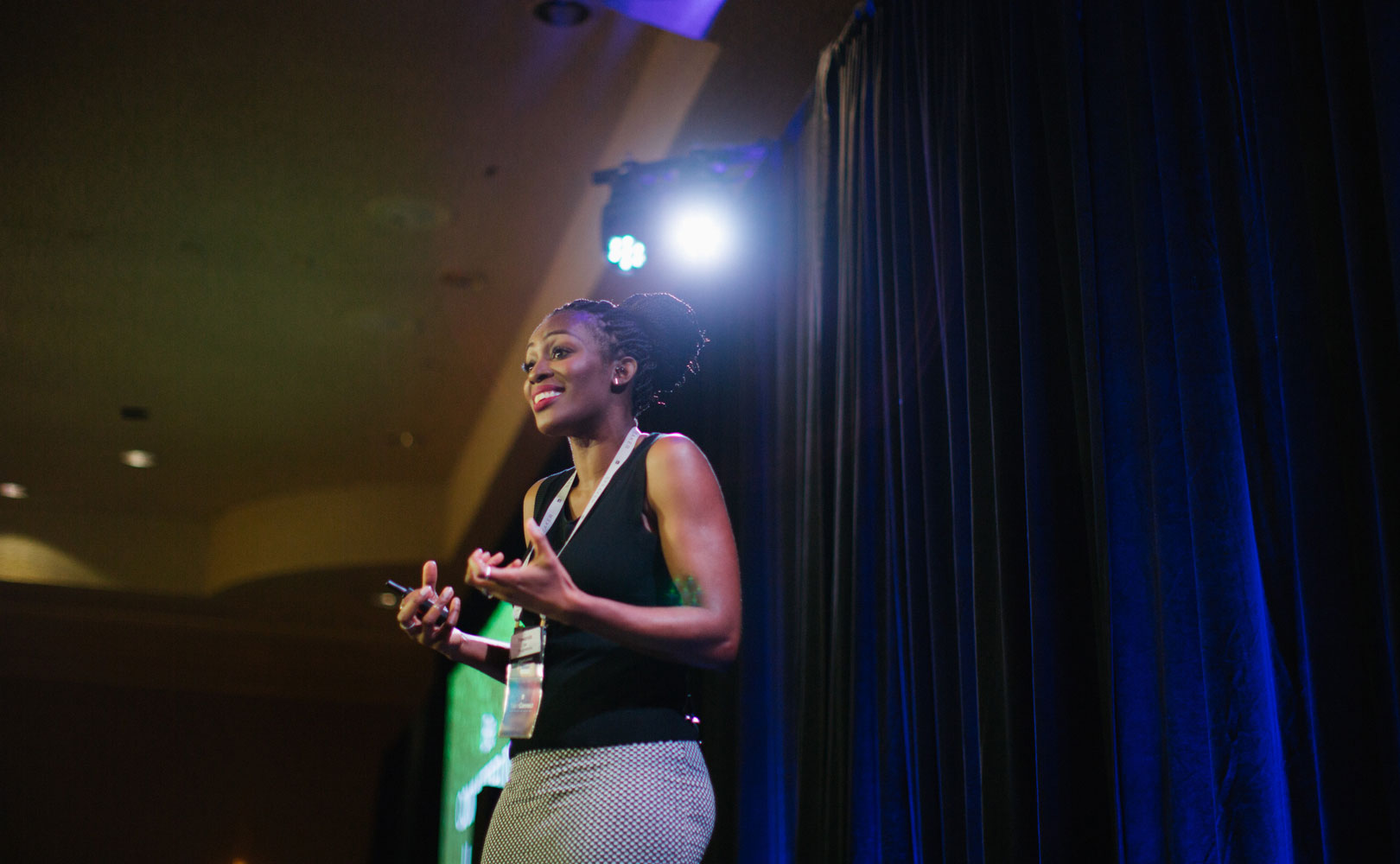 Here are the key insights she shared to help recruiters embrace the challenges of creating a better, unbiased hiring process and a more inclusive workplace culture.

1. Be courageous—speak up about issues, and be willing to listen

“10 years ago, the founder and leaders of ThoughtWorks determined that we would be a company that stood up and spoke out,” Yewande reflects. Part of this involved focusing on its employees and the community at large—even at the expense of profit.

This included rejecting a new client that sexually harassed female consultants. The company also decided to open an office in a less developed rural area of South Africa, as opposed to the more affluent capital, to support the marginalized community. But while these actions are admirable, Yewande acknowledges they’re only part of the story.

“Courage is not just about the one who will stand up and speak up,” she says. “It’s also about the person who’s willing to sit down and listen.”

It takes courage to admit that you might be wrong—and to be willing to learn, Yewande says. This is a step that leadership must take to truly embrace the importance of diversity initiatives. And when employees embody these values, the result is a more welcoming and inquisitive culture for all.

As a recruiter, you can be courageous in kickstarting a diversity hiring initiative, listening to others’ perspectives on it, and valuing candidates who align with these values.

2. Be open—ensure candidates are a good fit for a culture of learning and understanding

For ThoughtWorks, it was important that all employees shared the company’s dedication to inclusion and diversity. This was reflected in the company’s interview process.

“If you were to interview at ThoughtWorks, you [would] be asked this question: how willing are you to be wrong about your opinion on the world?” Yewande says. “You can’t create a diverse and inclusive organization if people have already made up their minds about the world and the people in it.”

ThoughtWorks looks for candidates that embrace continuous learning. That extends beyond the work itself—candidates must be willing to challenge their own biases, even when it’s hard. The recruiting team is upfront about this during the hiring process, screening for people who are willing to have in-depth conversations confronting their biases.

“To create a culture of understanding, you have to have people who are willing to have their assumptions and perceptions about the world, society, and their place in it challenged and possibly changed,” Yewande says. “This is a conversation we have with every single candidate. It unearths any intolerance someone might have that would go against the type of culture we want to create.”

But it wasn’t always that way. Yewande reflects that in 2011, after rapidly filling the company’s new South American offices, ThoughtWorks soon began receiving reports of chauvinism and other biased behavior. The company realized that to create the culture it wanted, it would need to hire people who embodied its values—and let go of people those who didn’t.

“We found that we’d hired people that were not respectful and not empathetic,” Yewande admits. “And so we had to let people go who were going to be detrimental to the culture and not open to change. We also had to look at our interview process and see where we had missed it.”

Yewande emphasizes that the goal is not to create a single viewpoint, but to encourage respect and empathy, and to set expectations for everyone at the company. Highlighting this in the interview has another benefit.

“It also unearths any passions and experiences around social and economic justice that would enrich our organization and help us find role models,” she says. “It is everybody else that you bring into the organization that will determine if your organization is inclusive. Diversity hiring is everybody hiring.” To create a truly inclusive culture, every member of the team needs to be onboard, so don’t be afraid to talk about it during interviews to see how your candidates respond.

3. Be uncomfortable—encourage the difficult conversations

Realizing that you’re biased isn’t comfortable—but Yewande thinks everybody should own that discomfort and grow from it. Having uncomfortable conversations, she says, is how we “remove the perception of what divides us and see life through someone else’s lens.”

To spark these conversations and the initiatives that spring from them, ThoughtWorks invites diversity speakers to its offices. Yewande admits that at one of these talks, she had an uncomfortable realization herself: a tech lead stood up to share his experiences of feeling pressured to assimilate—speaking in his authentic South Indian accent. Yewande and her colleagues had always just assumed that the Midwestern accent he typically used came naturally to him.

“What does an Indian man have in common with me? Turns out, quite a bit,” Yewande reflects. “And so what starts out as an uncomfortable conversation soon becomes an opportunity for people to really learn from each other. Judgement is replaced with curiosity, and curiosity gives rise to empathy.”

By ensuring everyone is equally invested in creating a fairer hiring process, it becomes easier to have uncomfortable conversations and spot things that could be damaging to the culture you’re creating. This is something you can encourage within your company. Have these conversations, even if they’re difficult, to inspire deeper understanding and genuine concern, awareness, and outrage. At ThoughtWorks, this has led to positive results like a male interviewer voicing his concern over a candidate who spoke directly to him, ignoring the woman sitting next to him.

4. Be committed to learning—keep trying until you find a method that works

ThoughtWorks’ approach to diversity is all about tackling the issue at its roots. Yewande described several of the successful initiatives that sprung from this approach—like making sure candidates always interview with a panel that reflects the company’s diverse workforce.

“We ensure our interview panels are diverse,” she says. “People interview with people that look like them, even if it means flying people in.”

Even if you can’t fly people in, technology like iPads makes it easy to keep interview panels diverse. Other tactics you can try that have worked for ThoughtWorks include hiring for skills over education or experience, and expanding benefits to cover things like adoption, surrogacy, and transgender healthcare. You can also avoid focusing on prestigious accomplishments, which can often hinge on who a person knows, barring certain groups from entry.

“We removed privilege as a hiring criteria,” Yewande explains. “A lot of hiring managers in the tech space will look at people that have spoken at conferences and meetups. But when women and minorities are marginalized from these communities, it becomes a criteria based on privilege and not necessarily talent.”

Yewande doesn’t just want to share the company’s triumphs. In the spirit of openness, she also reflects on some of the missteps the company made along the way. Mistakes are inevitable—the important thing is to continually learn from them and change for the better.

“Did it all go well? Absolutely not! In 2012, ThoughtWorks was considered the most difficult interview to take according to Business Insider,” she admits. In fact, ThoughtWorks’ interview process was deemed tougher than those at tech giants like Facebook, Amazon, and even the notoriously difficult Google. This was due to the company’s “ethics interview,” which followed coding exercises and a technical interview, and included questions, e.g., “how would you increase the number of women in tech?”

While the company was proud of this question, they realized it was blindsiding candidates who didn’t know what to expect. “We had to gain more understanding and create more transparency in our process,” Yewande says. This helped the company to “show people what we were trying to achieve with our process so it demystified it a little bit.”

Becoming more inclusive isn’t easy, and there aren’t any shortcuts. But Yewande emphasizes that companies can begin following in ThoughtWorks’ footsteps. The key is being willing to try, monitoring your results, and trying again when things don’t work out the way you hope.

“You have to keep your hands on the steering wheel, otherwise, you will veer off course,” she says. “But if you do, course correct immediately.”

You can watch Yewande's full talk at Talent Connect 2017 below: