The Fastest-Growing Jobs for Male and Female Grads

There was a (long) time when female college graduates had four career tracks open to them: teacher, nurse, secretary, and housewife. Male graduates? They had everything else.

But the gender of jobs, like the gender of people, is much more fluid these days. And that creates larger and richer talent pools for recruiters and hiring managers who hope to tap into the skills, perspectives, and energy of the class of 2019 as the first wave of Gen Z parades off campus and into the workplace.

We’ll see what roles they march into, but if they’re anything like their predecessors, we’ll probably have a big new batch of software developers. That’s the most common job for 2018 grads in the United States today, according to a new LinkedIn analysis. And while software development is popular and in-demand, it’s not exactly the most diverse workforce: Just 23% of software engineers are women, per LinkedIn Talent Insights.

So we thought it’d be interesting to see how the gender balance of new grads’ jobs has changed over time — especially as many employers successfully diversify their workforces through entry-level hiring programs.

Here are the top five jobs where female grads are making the biggest strides — and the top five roles where male grads are gaining even more ground. (These were the jobs that saw the biggest swing in a particular gender getting hired from 2013 to 2018. For example, if women were 20% of the new grads hired into a specific job in 2013 and were 30% in 2018, that would be a 50% upswing.)

Female grads are gaining in roles that combine creativity and tech 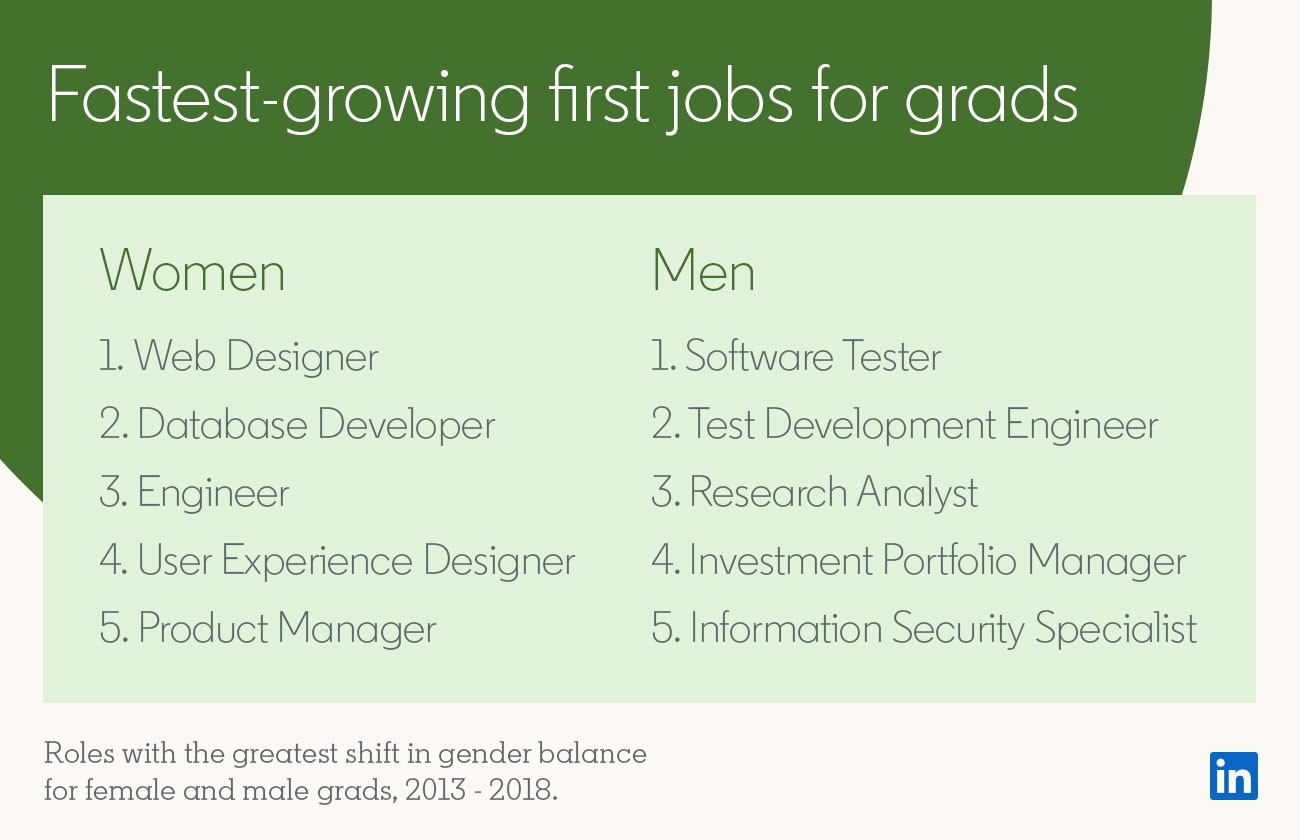 Female grads are making the biggest gains in these five jobs, though men still make up the majority of new grads hired into each role.

The top four jobs on the list demand technical and analytical skills. Tellingly, both web designer and UX designer also call for employees who are creative, who have both an eye for detail and an eye for design. UX design is one of the most in-demand hard skills, according to LinkedIn data.

But while tech skills play a part in most of these roles, the tech industry still has a gender disparity that may be getting worse, not better. Female representation has recently declined in the information and communication technology (ICT) industry, despite an overall increase in women graduating with STEM degrees.

Men already made up the majority of new grads hired into these five jobs — but over the last five years, the gender balance has grown even more unbalanced for these roles.

As with jobs for new female grads, many of the roles here are in technology. Two of them — investment portfolio manager and research analyst — are often found in finance.

While finance overall has a relatively good gender balance, there’s still a sharp disparity when it comes to leadership roles, and 50% of women in the industry say promotions are biased towards men.

Your company may have already started talking to candidates from the Class of 2019. And if you’re trying to improve your diversity and inclusion, you really need to be talking to recent grads, as data shows that companies committed to diversity can create the most impact by bringing in diverse cohorts to their entry-level positions. Some companies aren’t waiting for the pomp and circumstance of graduation — they’re engaging female candidates years earlier.

Blizzard Entertainment, the wildly successful video game developer that publishes World of Warcraft and Diablo, nearly tripled its number of female interns in a single year, in large part by changing how it recruited on campus.

Blizzard began seeking out women-led groups and clubs on campus and telling the company story to them. They also identified professors who were teaching relevant courses and asking them for recommendations of top female students. Finally, they enlisted their current female employees to return to their alma maters as ambassadors for the company. In the first year, female interns increased from 12% to 32%.

Similarly, Australian software company Atlassian was able to dramatically increase the representation of women in their graduate hiring. After changing their employer branding, job posts, and interviewing process to be less biased, their incoming class of tech grads was 57% women.

In LinkedIn’s recent Gender Insights Report, we share five tips that can help you achieve the gender-balanced hiring mix you’re striving for — whether you’re looking to fill entry-level positions or add a new hire to the C-suite (where gender and racial imbalances are far greater).

1. Understand your current gender split. Benchmark your company’s gender mix for different roles and how it compares to the industry average and then set aspirational goals.

2. Boost your employer brand to appeal to different audiences. Make sure that your career site captures, in photos and words, the full range of employees who work for you. Use Sponsored Content to help reach students who may not be aware of your brand.

3. Write gender-neutral job posts. You can use augmented writing platforms to eliminate language that is stereotypically masculine or feminine. By stripping the listed requirements in your posts down to the true must-haves or even replacing qualifications with the job objectives, you will elicit a more gender-balanced response (and hire more successfully).

4. Develop a data-driven sourcing strategy. Use LinkedIn Talent Insights for each position to identify cities or industries that are hidden gem talent pools with a high availability of the gender you’re looking for relative to demand.

5. Chart your outreach and response by gender. Keep track of the candidates you contact and make sure that the ratio of men and women aligns with the ratio you have in mind for your pipeline. LinkedIn Recruiter can show you how your InMail messages perform by gender, which gives you a chance to tweak them if they’re underperforming with either one.

Final thoughts (there will, however, be no speech)

Spring is clearly an exciting time for new graduates, diplomas in hand, to begin hunting for the job that will launch their work career.

But it should also be an exciting time for you and your company, a time when you can harness some of the electricity and Gen Z thinking that’s exploding off of campuses everywhere. As a bonus, the young men and women looking to swap their bachelor’s degree for a job at your company can help you fine-tune your gender balance, which may be just the thing you need to school the competition.

Methodology: All data aggregated from public LinkedIn profiles. To generate this analysis, we looked at the first full-time job graduates start after earning a Bachelor’s Degree (limited to 4 years after graduation, and excluding part-time roles and internships). To calculate growth, we compared the percentage of men and women entering the workforce by occupation for graduates in 2013 vs. 2018.

Gender is inferred from a member’s first name and pronouns used on their LinkedIn profile. Members whose gender could not be identified as either “male” or “female” were excluded from this analysis. This data was examined at a global level across LinkedIn’s platform, but only includes countries with at least 67% inferred gender coverage. Gender identity isn’t binary and we recognize that some LinkedIn members identify beyond the traditional gender constructs of “male” and “female.” As members begin to self-report gender on their profiles, we will be able to share more inclusive gender data.

*Photo by VIA Agency