InMails are the best way for you to contact and host conversations with candidates in your market. Allowing you to contact first, second and third degree connections immediately, plus the ability to unlock candidates who fall outside of these brackets. InMails help you access even the most hard to reach candidates and command a response.

47% of LinkedIn traffic is mobile, so make your InMails short and to the point for maximum effect. Personalising your communication is key, make sure you reference companies, schools or connections you have in common with someone before making an approach. Remember that InMails are a direct reflection of your company and your brand personality so spend time getting it right. By setting the right tone from the offset, you’ll be setting the stage for what comes next, allowing you to create a positive experience for your candidates.

Personalise your InMails with the things you have in common to provoke a response.

Find members who are in the same LinkedIn Groups as you. You are 21% more likely to get a response from a candidate who shares a group with you.

Consider referencing a former employer in common, this can increase response rates by 27%.

Find the best time to send your InMails. Between 9am and 10am local time (for the candidate) on a Thursday has the highest response rate.

Don’t ask for a resume straight away. Spend time getting to know your prospects first.

Don’t pitch a position that’s at a lower level than the candidate’s current position.  70% of members who started a new role in the past 12 months were either promoted or took a lateral move.

Don’t reach out to candidates who aren’t suitable for your role. If you’re reaching out without considering how your role connects with their experience, it’s highly unlikely they will respond.

Don’t send InMail over the weekend.  InMail messages sent on Saturdays are 16% less likely to get a response compared to those sent earlier in the work week. 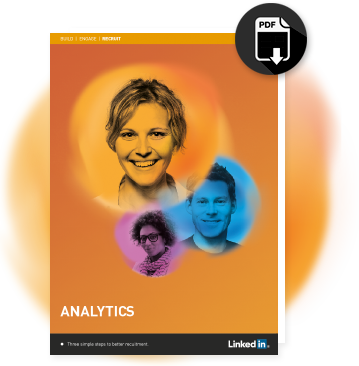 It’s important to review your InMail performance regularly, to make sure your communication strategy is watertight. InMail analytics gives you the means to assess your performance and review your activity. It’s advisable to familiarise yourself with the companies to whom you’re sending most of your messages and the important areas you have in common. Set your time-frame and use the filters available to set your parameters. You can also download your data to a .CSV file which summarises the individual recruiter's InMail data for each person on your dashboard.

If you are already using InMail, this tip sheet will help you analyse your performance.